The 19th of December 2022 saw the climax of the current edition of the World Cup in Qatar with the victory of Argentina, whose fans brought a whole new meaning to football passion. We experienced spectacular moments of unexpected victories, such as the one from Japan against Germany. Or shock defeats such as the one of Spain against Morocco. We also saw how in an instant of magic, great players like Mbappe can change the game. But this World Cup also saw an unparalleled use of new technologies to assist footballing officials in better and faster decision-making. In this article, we aim to explain how SportsTech has influenced the World Cup and what is in store for the future of football, as well as Sports in general.

Word Cup History: A tale of two halves, and balls

The story of the FIFA World Cup started in 1930 in Uruguay. The final was between the host country Uruguay and Argentina in Montevideo. There was no official ball, both teams wanted to play the match with the ball they brought along. Argentina had the Tiento while Uruguay insisted on the T-Model from their kit bag. After a heated argument, FIFA officials decided that Argentina’s ball would be used in the first half while the second half was played with Uruguay’s T-Model. The decision would have a big impact on the match itself. Argentina raced to a 2-1 lead in the first half while Uruguay turned the tables in the second to win the match 4-2. This match led to the birth of the famous phrase in football – ‘a tale of two halves.

In Italy in 1934, the Federale 102, a ball made of cotton instead of leather, was used. Until 1950, none of the balls used at World Cups had a valve to regulate air pressure. Azteca, the ball used in Mexico in 1986 was the first fully synthetic football. Diego Maradona’s Hand of God during the tournament made the Azteca a cult classic.

While balls at the FIFA World Cup have evolved on both technological and design fronts over the years, the first breakthrough came in World Cup 2014 when goal-line technology was introduced, following several refereeing errors at the 2010 World Cup. Goal-line technology is the use of electronic aid to determine if a goal has been scored or not. In detail, it is a method used to determine when the ball has completely crossed the goal line in between the goalposts with the assistance of electronic devices. At the FIFA World Cup in 2018, FIFA took the next step to use VAR technology on the world’s biggest stage, and it has proven to be an undisputable success.

The Qatar 2022 World Cup is an inflection point in the use of new technologies for a major sporting event. We shall explain how. 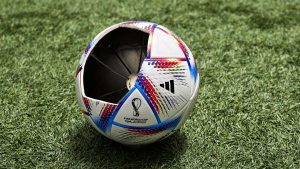 Al Rihla – the official FIFA World Cup 2022 ball, means ‘the journey’ in Arabic and the design has been inspired by the culture, architecture, iconic boats, and flag of Qatar – the host nation. But this ball is technologically different from all previous balls used. It features a new suspension system inside it to stabilize a 500Hz inertial measurement unit (IMU) motion sensor. The sensor, which is powered by a rechargeable battery, provides valuable insights into every element of the movement of the ball. The device weighs 14 grams and actually houses two separate sensors operating simultaneously:

So, any time the ball is kicked, headed, thrown, or even so much tapped, the system picks it up at 500 frames per second. Data is sent in real-time from sensors to a local positioning system (LPS), which involves a setup of network antennas installed around the playing field that take in and store the data for immediate use. When a ball flies out of bounds during the course of play, and a new ball is thrown or kicked in to replace it, the backend system automatically switches to the new ball’s data input without the need for human intervention.

The sensor inside the ball can detect both two and three-dimensional movements, give output in real-time and provide cm-accurate calculations with a delay of fewer than 20 microseconds. As such, making official decisions that affect live gameplay is now easier than ever before.

One concrete example: In the match against Uruguay, Portugal opened the score in the 54th minute, but the identity of the goal scorer was in doubt, with both Bruno Fernandes and the coach unable to clarify whether or not Ronaldo provided the decisive final touch. Technology in the match ball proved conclusively that Cristiano Ronaldo did not make any contact with the ball and the FIFA statement runs as follows: “In the match between Portugal and Uruguay, using the Connected Ball Technology housed in Adidas’s Al Rihla Official Match Ball, we can definitively show no contact on the ball from Cristiano Ronaldo for the opening goal in the game. No external force on the ball could be measured as shown by the lack of ‘heartbeat’ in our measurements. The 500Hz IMU sensor inside the ball allows us to be highly accurate in our analysis.”

Paired with this ball sensor is optical camera tracking from Hawk-Eye, which is explained next. When combined, these two data sources allow for offside decisions that are not just highly accurate, but also available much faster than in the past.

Semi-automated offside technology is an evolution of the VAR systems that have been implemented across the world. The new technology uses 12 dedicated tracking cameras mounted underneath the roof of the stadium to track the ball and up to 29 data points of each player, 50 times per second, calculating their exact position on the pitch.

The 29 collected data points include all limbs and extremities that are relevant for making offside calls. By combining limb-tracking and ball-tracking data and applying artificial intelligence, the new technology provides an automated offside alert to the video match officials inside the video operation room whenever the ball is received by an attacker who was in an offside position at the moment the ball was played by a team-mate.

Before informing the on-field referee, the video match officials validate the proposed decision by manually checking the automatically selected kick point and the automatically created offside line, which is based on the calculated positions of the players’ limbs. This process happens within a few seconds.

After the decision has been confirmed by the video match officials and the referee on the pitch, the same positional data points that were used to make the decision are then generated into a 3D animation that perfectly details the position of the player’s limbs at the moment the ball was played. This 3D animation is then shown on the giant screens in the stadium and is made available to FIFA’s broadcast partners to inform all spectators in the clearest possible way. 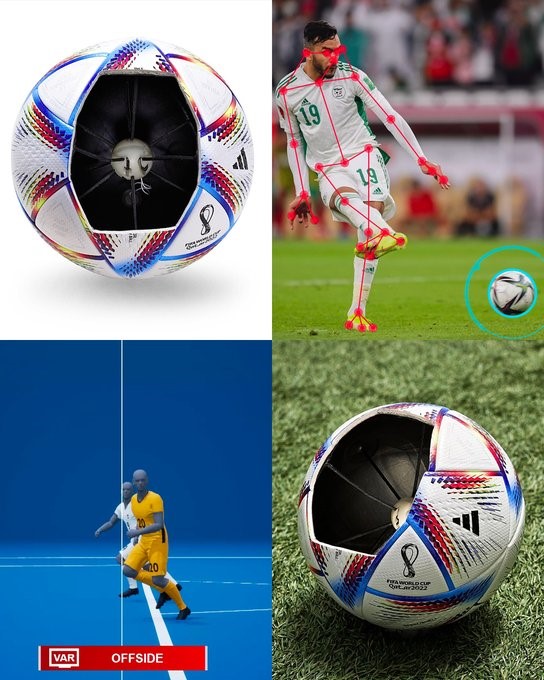 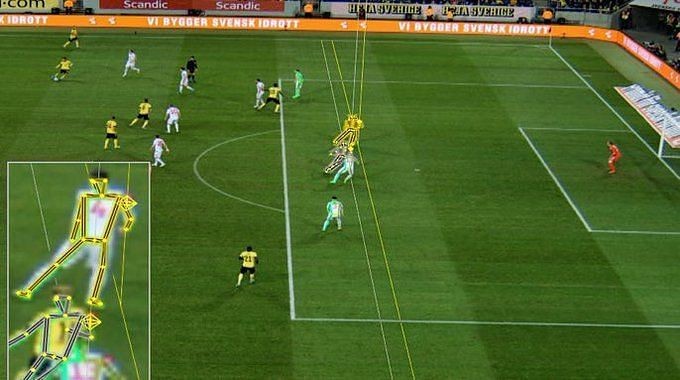 With a 50Hz video, commonly used in HD screens, a new image is generated 50 times per second. With the ball-tracking system, that data is coming in at 500Hz, meaning any gaps in true positioning are below two milliseconds long, so an unparalleled level of accuracy.

Testing of the system was done in two ways:

Blind player testing: With the help of clubs in places like Spain or Germany, extensive blind testing was carried out to see if players could tell the difference between “normal” balls and balls infused with the sensor/suspension setup without knowing which was which ahead of time.

Mechanical shooter testing: In a lab setting, robotic shooting devices can be programmed to “kick” the ball at varying speeds, spins, and directions. High-speed cameras then evaluate the flight of the ball, ensuring that the presence of the sensor does not create abnormal flight paths.

This testing was performed in several professional and grassroots settings, such as the 2021 FIFA Arab Cup in Qatar and the 2021 FIFA Club World Cup in Abu Dhabi.

Other innovative technologies at Qatar 2022

Stadium cooling: Though highly controversial, cooling vents at the stadium helped fans battle Qatar’s stifling heat. Air was drawn into pipes and vents in the stadium, cooled, filtered, and pushed out again. This created a cool bubble inside the stadium, where sensors help regulate temperatures. The cooling took place only where people are and allow stadiums to be kept between 18-24C.

FIFA Player App: For the first time, players in the 2022 FIFA World Cup had access to a FIFA Player App which gives them insights into their on-field and performance data shortly after each match. The FIFA Player App includes enhanced data and intelligence metrics captured by a team of expert FIFA performance analysts and tracking data. This takes into account whether a player moved to receive the ball, the pressure they applied to an opponent, receiving locations, and more. 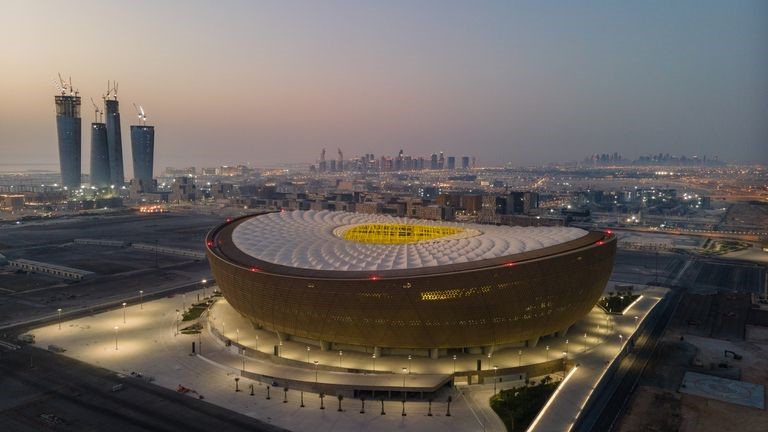 While goal-line technology could significantly reduce refereeing errors during play, critics point out that such technology would impact the human element of the game and remove the enjoyment of debating mistakes. Several years down the road, people are still discussing Geoff Hurst’s goal against Germany in 1966 or Maradona’s hand of God in 1986.

Other critics believe it would be prohibitively expensive to implement the technology at all levels of the game and particularly for smaller/poorer football associations.

The system is also not exempt from errors. In June 2020, during a Premier League match (Aston Villa/Sheffield United), the technology failed to award a goal for Sheffield United even though Aston Villa’s goalkeeper had carried the ball over the goal line. As no goal was signaled, the game finished goalless. The failure was due to an anomalous amount of occlusion of the cameras’ view of the incident.

The combination of the ball- and optical tracking could become a familiar tool to everyone involved with the sport. Teams and players could use the resulting data for next-generation tactical analysis; broadcasts could use it to visualize the game and draw in new viewers. Fans could eventually have access to a vast ocean of new stats which was never possible until now. More than 300 different metrics are collected in multiple categories, including technical data (shot and pass speed, ball possession time, distinct ball actions), performance data (dribbling speed, accelerations, and sprints — both with and without the ball — plus measures of athlete “load”) and tactical data (for both teams and players, tactical concepts such as space control, pressing, ball gains/losses and counters can be tracked).

Wearables to Prevent Injuries: wearable fabrics will become commonplace in the future, in both shooting sleeves or performance socks, the latter of which can track virtually everything, such as specific force impacts on distinct foot areas, such as heel or toes, ankle angle and roll analysis and so on. Such technology can glean vital muscle amplitude data (such as the force a muscle applies) from several areas of the body, including the glutes, hamstrings, and quads. It also tracks “total muscle load,” a combination metric that aids in areas like general fatigue and recovery.

Virtual Reality: Currently, several developers are testing virtual reality devices which can allow viewers to feel the stadium without being physically present there. There is even more tantalizing potential: imagine watching plays (or even an entire game) from the direct vantage point of Kylian Mbappe, Lionel Messi, or any other player of your choosing. 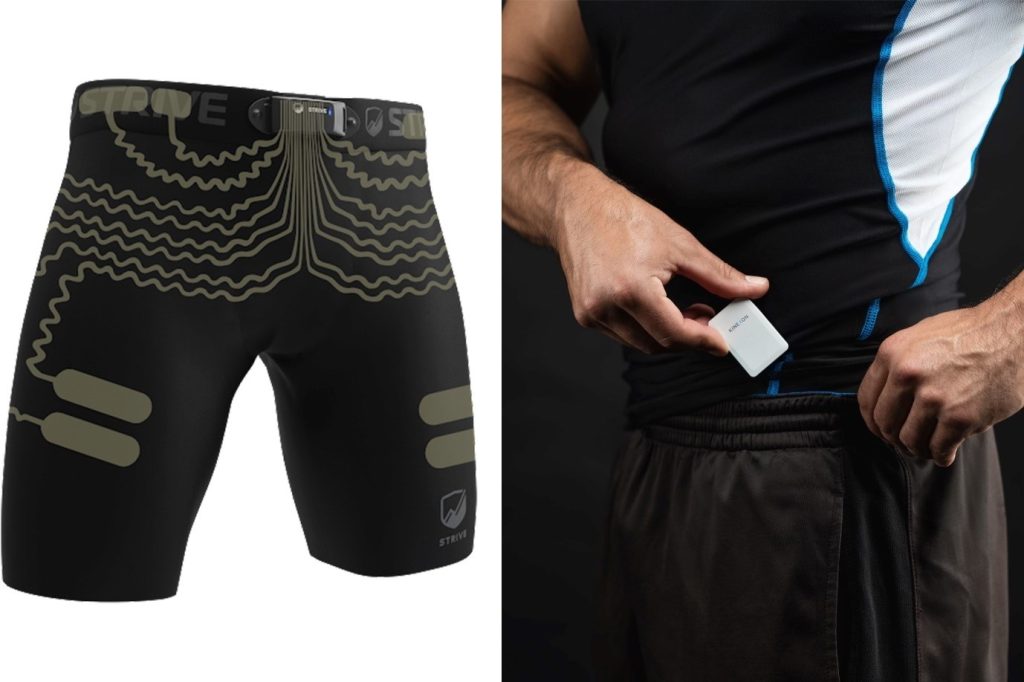 Infoclub Ltd has proudly served IT Professionals seeking to enhace their skillsets with the latest certification in IT with excellence for over 30 years.

Or fill in the form on the right.

FOR PRICING & REGISTRATION, SEND US A MESSAGE

Infoclub LTD is an accredited training provider. We are registered with several International Professional Bodies. 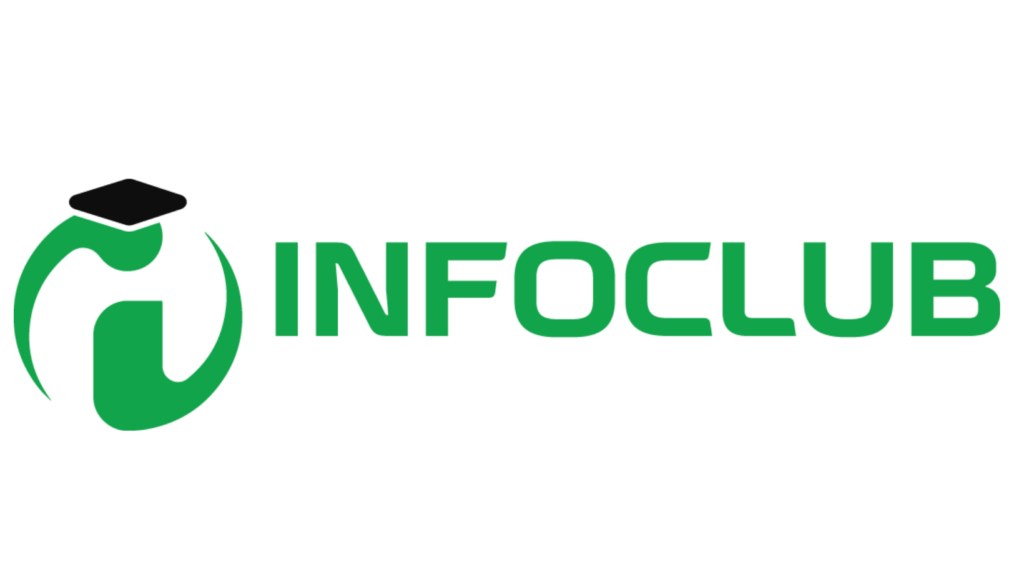 Infoclub LTD Partners with several small and medium companies to provide the best IT Services in Mauritius and in the United Kingdom.

We are easily reachable through several social media platforms. You can also leave us an email at any moment and we will get back to you as soon as possible.